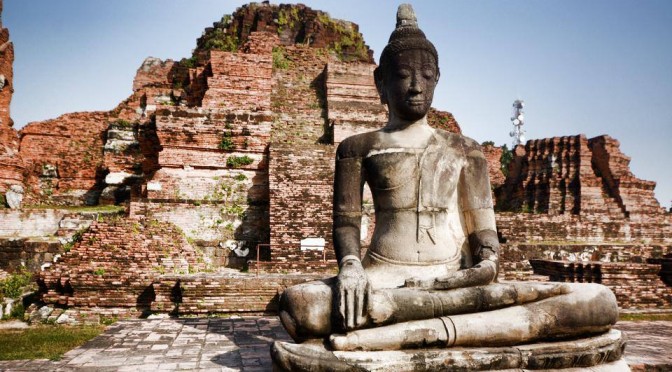 Not being able to fly back to Germany for Christmas, we selected a location a wee bit closer (well, on the same continent at least), and ended up in Thailand, mainly Bangkok & Chiang Rai. Despite only having 3½ days in Bangkok, we managed to squeeze in a little day trip to Ayutthaya (1-2hours from Bangkok). We got a private guide for our trip (Thai Private Tour Guide). Though you can definitely do the travel up on your own. There’s a site listing the different travel options in great detail here: Getting to Ayutthaya from Bangkok

We were assigned to Pu for the day – definitely one of the nicest guides we’ve had so far. Great personality, very knowledgeable about relevant topics, and very kind. It felt more like a good friend bringing us around. Even before the trip started, we had a good feeling about it with Chob the organiser already sending us detailed suggestions on local foods to try, and introducing us to Thai customs, through emails. Additionally, Thailand was seeing its longest-yet “winter” (as the locals call it), and was having cool weather in the South (21-27°C). This was great news for us, though Pu was all wrapped up in her jacket and scarf, and seemed on the verge of catching a full blown cold. 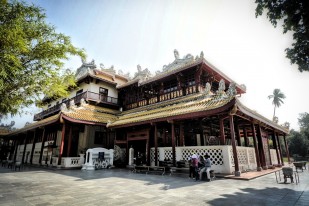 View from the Pagoda

You’re allowed to buy bread to feed the royal fishes in the pond. 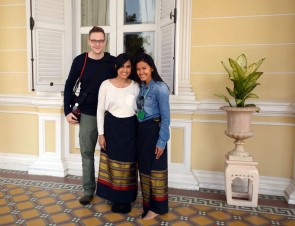 Females had to wear an additional garb around the waist before entering some of the compounds. (even if you’re already wearing long pants).

Anyway, we started off at Bang Pa In Summer Palace. The palace grounds was bigger than we expected, and the different buildings come from an interesting mix of influences – there were Chinese designs (materials were given as gifts and delivered over by China), and European influences. 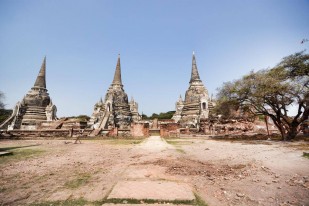 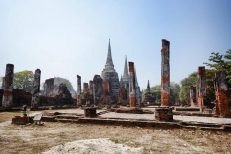 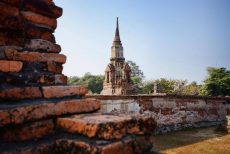 Then, we moved on to the Ayutthaya Historical Park (UNESCO site). It was really peaceful and quiet (different from the Angkor Archaelogical Park in Siem Reap), which made it far more enjoyable to stroll or bike around the area. However, most of the structures had already been destroyed during the war with old Burma, while the remaining stupas ravaged for treasures. Everything else is left to our imagination. This was the capital of Siam, before its complete destruction caused the new capital to be moved to Thonburi, and finally ending up in Rattanakosin. The facade of Wat Sri Sanphet still remains though, and was quite a haunting sight. 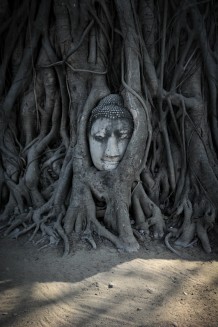 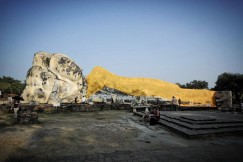 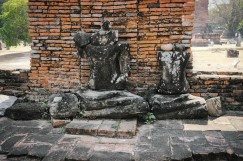 Buddha Heads were the favourites among thieves.

We had lunch at a quaint little restaurant by the river. Great food. The restaurant had a tiny pier where we boarded our private long tail boat around Ayutthaya. The long tail boat lasted about 40 minutes and we got to see various temples and interesting structures from the boat. I also loved the fact that our long tail boat “driver” slowed down immediately whenever we raised our cameras to take a photo. Apparently, not a lot of people opt for the long tail boat. Most settle for the longer big cruises all the way back to Bangkok – which do not go around the narrow Ayutthaya islet, and would be too big to explore the smaller and narrower routes. 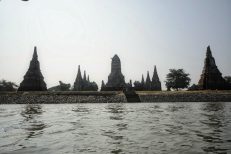 One of the many structures we passed by. 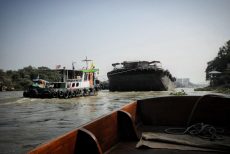 Our final stop was Wat Ratchaburana. As usual, beautiful work from the past. Additionally there is an underground crypt, that’s worth mentioning. This is where the treasures were supposed to be kept. The walk down is incredibly claustrophobic, steep and narrow (there were even spiders lurking in the corners), but if you survived all that, a nice surprise awaits in the crypt. The centuries-old mural paintings we saw in there were worth it. To us, at least. We’d recommend doing it if you’re already there. 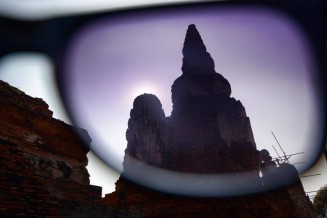 Due to the demonstrations going on in Bangkok on our visit, we were stuck in a traffic jam coming back. But on the bright side, we were stuck in a big Volkswagen minibus with water and lots of delicious Roti Samai from the market. Nice snacks, and a good nap. It could have been worse. 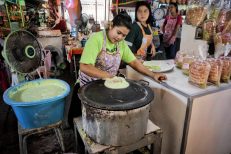 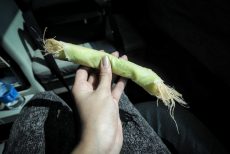