On our last day in Chiang Rai, we made a trip down to Wat Rong Khun, also known as The White Temple, before our flight back to Bangkok. The moment we arrived, we knew it was worth the trip. The temple was unlike any other we’ve seen – it’s exceptionally new (and still unfinished), with modern motifs and controversial art.

Before we even entered the temple, we could already tell it wasn’t “just another temple” with creepy skull traffic cones lining the area. The beautiful white temple looked pure and majestic, sparkling with its mosaic of mirrors in the distance, but got quite sinister as we got closer. Sculptures of decapitated human and demon heads hanging from a tree, numerous hands reaching out under the bridge towards the temple. More skulls all around… And then there was the downright unusual with Aliens and Predators guarding the entrance, for instance.

The designer of the temple, artist Chalermchai Kositpipat, decided that the temple should feature heroes and villains from contemporary pop culture to present the teachings of Buddha. Unlike most Buddhist temples in Thailand where you’d see mostly paintings of Buddha, Wat Rong Khun features characters like Superman, Ultraman, Spiderman and the likes. Even Neo from The Matrix was spotted, along with…wait, was that Doraemon? (What’s HE doing there?) Anyway, we weren’t allowed to take photos inside when we were there – but google them if you’re interested and see if you spot any of your superheroes in the murals. OR just click here: Wat Rong Khun Interior Google Images

Photos of the exterior and the vicinity:
(Click on photo for complete gallery view) 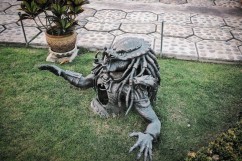 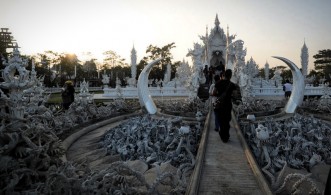 This was the toilet. How opulent! 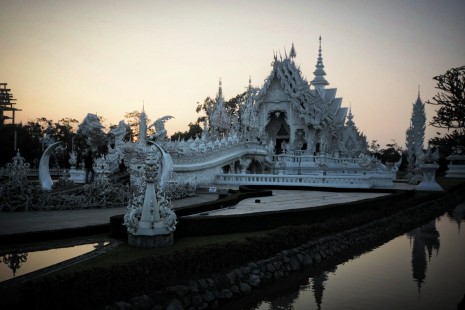 We really recommend anyone in the area to visit Wat Rong Khun. As it’s been said to take many more years before the temple will be finished in its entirety, it’ll be interesting to go back to see what newer bizarre things the artist has added to his work then.