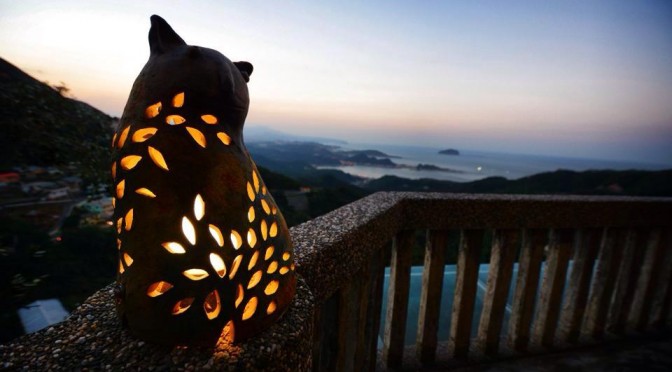 We got ourselves some affordable tickets to Taipei for the week just before Chinese New Year. On one of the days, we decided to venture a little out from the modern city to the North Coast. For that, we got in touch with Christine via her page on ToursByLocals. Her husband, Jan, came along on the trip, as well as her brother, Leo, who was our driver for the day. Below were some of the main spots we managed to visit. 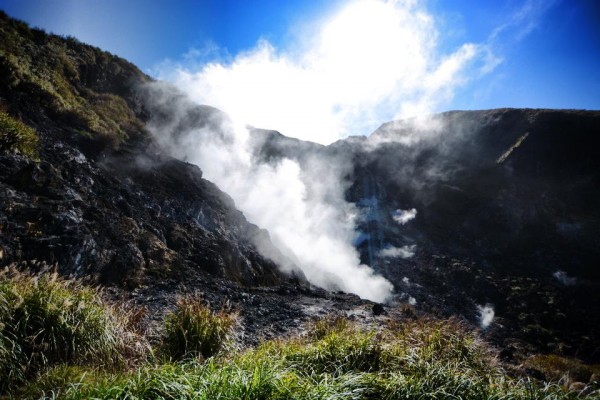 We first headed for the mountain of Yangmingshan, where sulphur vents/geysers can be seen and the ~lovely scent of rotting eggs can be smelled. Mm-hmm. 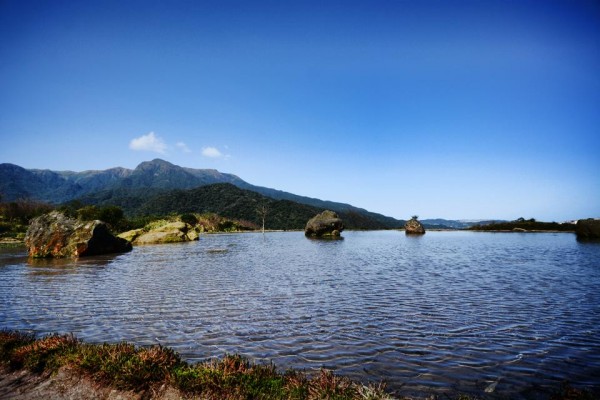 There’s also a tiny farming community making up the Ba-Yien Village (八煙聚落) slightly hidden in the mountain. The friendly locals seemed more than happy to welcome us, and we were able to have a little walk around the stunning surroundings at no charge. You’re allowed to sample the tea, or buy a pack (if you felt the need to express your gratitude). There were no other visitors at the time we were there, adding to the serenity of the place. 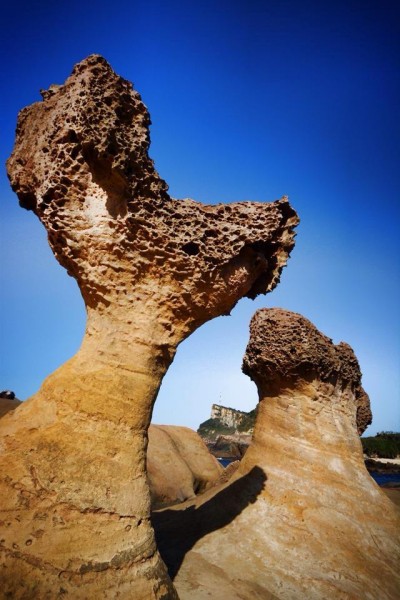 This place was pretty filled with tour groups from China. However, most of them headed straight to the Queen’s Head structure for photos, leaving majority of the rest of the site to us. The entire coastline was basically a geological park filled with curious-looking natural rock formations. And of course, they were all given names in accordance to their shapes, much to our amusement. (No matter how hard I tried, there were no Queens, turtles, or camels. There were only rocks staring back at me). I sure have a long way to go in the imagination aspect. 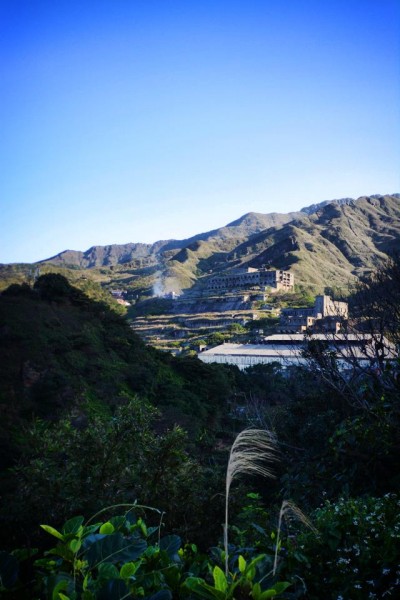 We first made a stop on top of a hill for a view of the coast. Due to the minerals and waste spillage from the old days of mining, the water has a distinct separation of colours (brownish yellow/blue green). Locals call it the Golden Coast, or Yingyang Sea (陰陽海), due to the separated colours). From this hill point, we also had a good view of the abandoned 13-Level smelter (十三層).

After that, we headed to the Jinguashi Golden Waterfall, owing its name to the colour, formed by the water carrying remnants of the copper and iron deposits from the cracks of the soil. 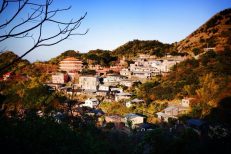 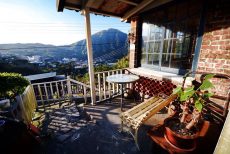 We went further uphill after this, walking towards the Jinguashi Gold Mining Museum, stopping by a nice little cafe with an amazing view of the old mining town below.

We made a final quick stop by the Prince Guest House, before making our way to Jiufen before fully dark. 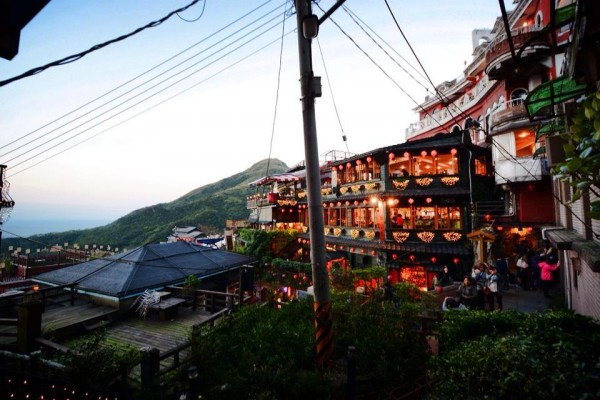 Jiufen basically means “9 portions” – Apparently the story went that  the village used to house 9 families, and everything would be ordered in 9 portions whenever shipments came in. This was another beautiful place I was glad we still had time for. I’ve heard much about the beauty of the town Hayao Miyazaki (宮崎駿) got his inspiration for Spirited Away (神隱少女) from. 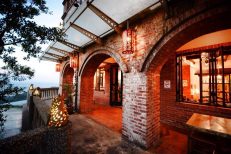 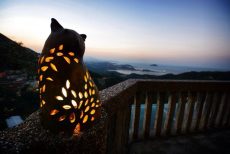 Despite it mainly serving tourists now, it retains most of its old charm. The views from the mountain side town, were as spectacular as the view of town itself. 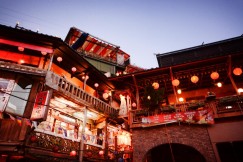 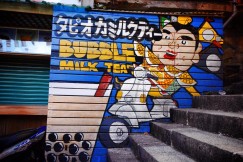 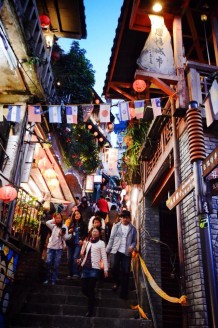 There were lots of sweet scents of floating around as you walk through the alleyway of shops. We got ourselves a pack of the honey coated almond flakes, thanks to the recommendation of Jan & Christine. We only wish we had gotten more. They didn’t stay around for long. Too delicious! We also saw some interesting ice cream pancakes which we forgot to try in the midst of rushing to Keelung. Unfortunately, we realised they were more a specialty of Jiufen itself and tough to find elsewhere. Next time, perhaps. 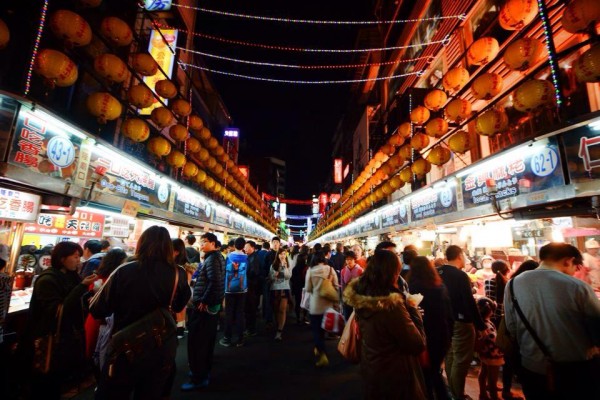 Finally, we arrived in Keelung. We were obviously hungry by this time, and the mesh of sights and flavours in the air was very welcoming. The night market has started. Our heads were close to exploding with the choices presented to us. Thankfully, Christine went around helping us gather little samplers of food. 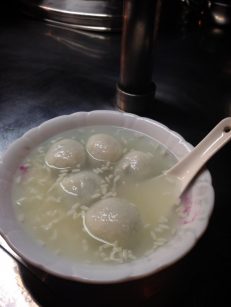 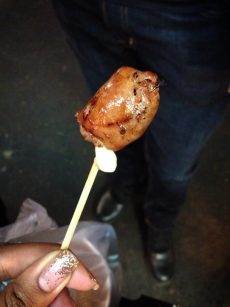 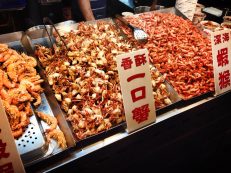 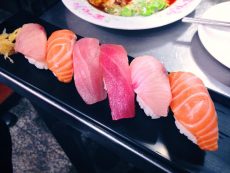 After all the little “snacks” and tasters, we were ready to have a sit down meal. Jan brought us to his favourite stall serving fresh sushi and sashimi. Oh what a tease, that’s a meal D & I can never resist. Taiwan is one of the major exporters for sashimi grade fish, even to Japan, so unsurprisingly, the fish we had were incredibly fresh for the price. It was also pretty surreal to be served raw fish with the oyster omelette stall right next to us. 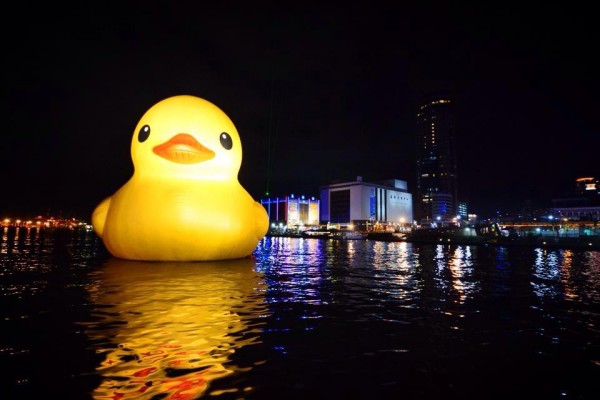 We ended with a visit to the temple nearby, and had a walk down to the giant duck, before saying goodbye to the lovely couple, and making our way back to Taipei on the intercity bus.

Take the Pingxi Rail Line – This line will lead you to interesting hiking trails, waterfalls, old mining towns, and even a cat town. Notable places to visit along this line are Houtong, Sandiaoling, Shifen, Pingxi and Jingtong. During the final week of Lunar New Year festivities, there’s a mass release of sky lanterns into the sky in Pingxi.