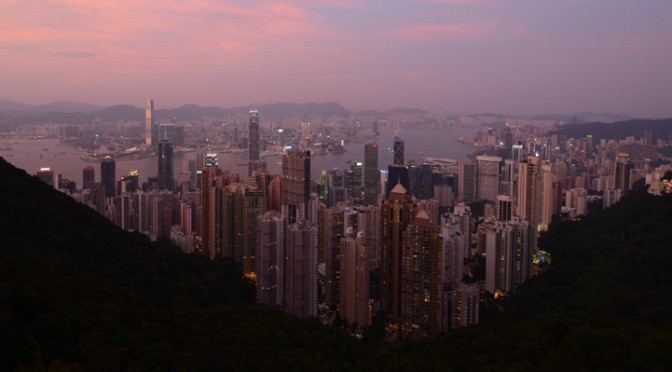 [Super backdated post, sorry. Just discovered it was just sitting around without being published like a dejected child.]

So, mid autumn’s weekend was spent in Hong Kong. It’s actually a first trip there for me, and for a Singaporean, that’s pretty embarrassing. But hey, I made it in the end and absolutely understood why so many have fallen in love with the city. It’s a charming mix of cultures.

And of course for the first timer, visiting The Peak is a must. Typhoon Usagi was already approaching us at that point in time (in fact, cancelling our flights the next day) though nobody could tell with the sunny warm days we had.

I thought it would be a great idea to be at The Peak just before sunset, to get a bird’s eye view of the city both in the day and as it darkens. Well, apparently the entire tourist population on the island thought the same way and it was IMPOSSIBLE to get on the peak tram in time. Waiting time that day was 2 hours. The kid inside me was severely disappointed because “like the tram goes up at a 45 degrees angle and stuff”, but the adult says “Don’t fret it, the view at the top is far more important and…I’ll be so back, Hong Kong”.

So the next thing we did was to try get a taxi. It costs about HK$50 to get to the top. The drive up was actually pretty scenic with views of other mountains, passing by mansions and condominium compounds on the mountain. Upon reaching the Peak Tower compound, you can have a nice stroll on the paths around the mountain, or pay to head up the rooftop of the Peak Tower. I have to say, seeing it for myself is definitely something else. The view was indeed as spectacular as pictures and people have raved about.

We took photos as the sun begins to set behind us, as well as when the city lights came on. Then we rushed off before it became completely dark to escape the crowd, and headed to the TST Promenade for the lights show (which was pretty underwhelming). 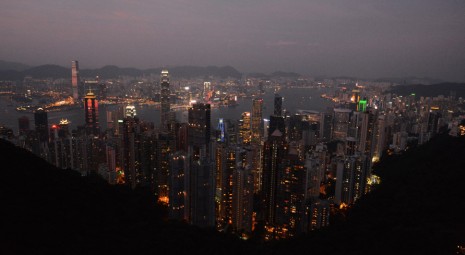 How to get there: Take the Peak Tram from the Peak Tram Lower Terminus which is a short walk from Central MTR, or simply take the taxi and say “The Peak Tower” – they all know where it is.