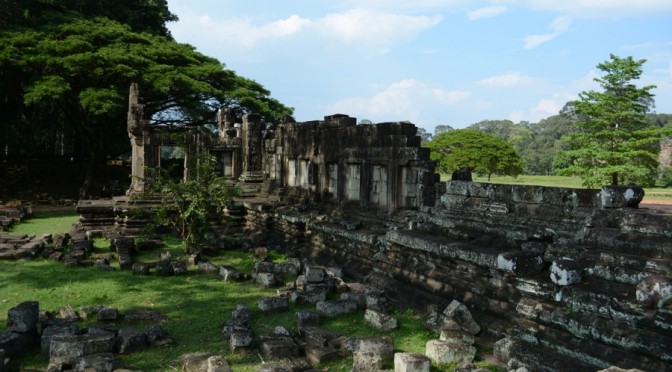 When people talk about Siem Reap, it’s usually all about this area of ancient temples. Most simply falsely refer to this site as the “Angkor Wat”. But Angkor Wat is merely one amongst the many temples in this huge area – though it is the star of the park and sees the most number of tourists at any time of day.

Both of us enjoyed seeing the temple ruins as a whole but we admittedly weren’t too crazy about visiting  every single one in detail. When it comes to structures like  these, I always preferred standing away admiring the entire majestic view, rather than being in each and every one of them.

We knew we’d get the temple burnout syndrome (when every temple starts looking the same) very quickly if we don’t pace ourselves out. With this in mind, we decided to view only the most important temples first and leave the others for next time. If planning which temples to visit get too confusing, your tuk tuk driver most likely could make a better itinerary for you. They know best.

Another thing we did to avoid temple burnout was to spread the temples out in two half days, and input other non-temple activities in your itineraries. There’s more to Siem Reap than the temples, afterall. On the first day, we added Tonle Sap to our schedule, and on the second, the Landmine Museum.

At the entrance, a digital photo of you is taken at the ticket counter and this photo will be printed onto your ticket. It’s almost like an ID. This ticket will be checked at every single temple.

Some of the temples we visited:

Reading up on the temples in advance might give you a far better understanding of the eras, and styles they were built in. The Canby website was great help to me (www.canbypublications.com).

People also often get so caught up by the beauty of the temples that they forget to mention other things they came across.

Some of the things you don’t hear as much:

Be prepared and all you have left to do is to enjoy the sights, and the experience of being surrounded by such ancient structures – opulent and magnificent.